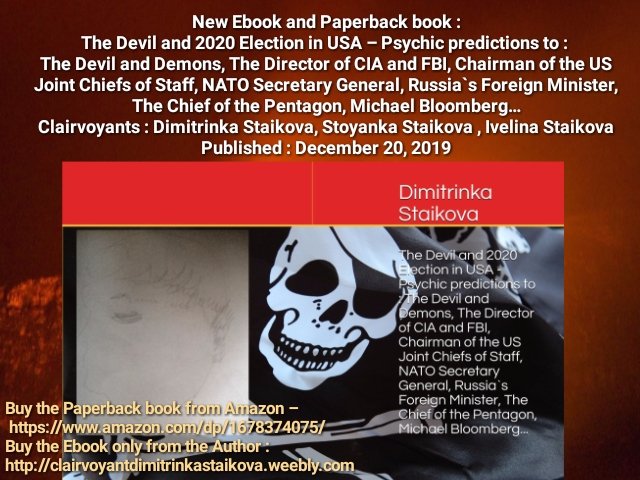 At December  31, 209 he has a strong pain at the neck, the muscles under the  neck and in the head – at right. I see pain in the  fingers of the left hand and at the left pelvic area. There is strong playing of the blood pressure – high blood pressure.  I see increased pressure in the right eye, swelling in the thyroid gland. I see a pain inside his soul. There is inflammation in the large intestine, Colitis, inflammation in the urinary tract and the prostate. There is starting of paralysis in the fingers of his both hands. He will have a scar on his right leg…

Now, he can’t bear the cold. He is merging very difficult five energy companies. Now, there is investing of money at South and southeast  from the airport of Baghdad about the making of a wall – border – multy-layered , that will be Iranian with a contract. Begins the entering of a huge groups of people from Iran in Iraq. A big ( united) energy company is funding the movement. When the needed amount of people and weapons is reached  – they are going at North of the airport of Baghdad. The armed squads will enter also in Syria and they will form a ring around Iran. Syria is  going back in her days of war (fire).

The American soldiers are withdrawing  to Turkey and Israel. Turkey will be  attacked. The invasion for now will end on the border. Israel will be attacked by air….

Today,  January 4, 2020 – he has a pain in the  thyroid gland , weaker pain in the heart and more intense pain below the heart. I see a pain in the prostate, inflamed urinary tract  and right lung. I see five beams for reconnaissance and invasion.  Bombs that has fallen (three bombs) on the same site, and there is one more bomb slightly at South (they are total four).

Goal – entering in Syria.  They have expected from South a resistance (rebuff) – people as wall. They are prepared for a plan of withdrawal,  which is false. Begins a surrounding to North (to the airport of Baghdad) and a crusade to Lebanon  – the Golan Heights. The goal is closure in a ring and the control of territories  from Syria,  Iraq. They are  prepared for unsuccess in this moment.

A large-scale operation  is prepared  and with a bigger covering of territories  – including Syria and Iraq. In Syria the presence of Putin will be crossed out (it is not in the near future)….

I see a swelling of the stomach caused by gases and very strong pain and a disease  in the stomach. It is forthcoming for him to watch explosions and fires, he is seeing explosion of a bomb close to him and he is surrounded by militaries. It is forthcoming the direction of two rockets at Northeast.  I see the connecting of four energy companies that will be ruled (managed) from one building. There is a forthcoming export of energy through railways.

January 2020 – Hassan Rouhani has a mouth closed. He is the leader who is leading  Iran. He suffers from pain in the spine. I see a going underground  – a fear of  assault.

February 2020 – Iran is led by a superior military leader. His interest is directed at South  of Iran. I see direction Northwest and rocket strike on a site that is also an oil field  – a big explosion.

March 2020 – Iran has organized the export of oil with ships. I see military  actions  – an attack over Iranian ships. There is a lot of anger toward the  West.

April 2020 – Problems with Russia. A murder of Iranian leader.  A travel to Russia.

Hassan Rouhani ‘s health : there is pain in the eyes and the nose, strong pain in the thyroid gland,  ill heart, gases and a swelling in the stomach,  ulcer, ill prostate and right kidney,  right pelvis.

I see two people from the authority  – one of them is killed,  the other is in coma  – Problems with the head. The official authority – the money are helping  for her expansion. There is an attack against the official authority  in Iran – three other people for which is unknown. The answer for now is in the  reconnaissance and help by Russians.  The idea for an answer is generals for generals. The Russians will help for the revenge.

Read more about  the  US military plans in our new book :

The Devil and 2020 Election in USA – Psychic predictions to : The Devil and Demons, The Director of CIA and FBI, Chairman of the US Joint Chiefs of Staff, NATO Secretary General, Russia`s Foreign Minister, The Chief of the Pentagon, Michael Bloomberg…​

​Order your Ebook today, Pay with Western Union Online  – 50 GBP and You will receive the PDF file (30 Pages) in the next 24 hours with Email delivery :