Media Confirmation about Payment from Turkey to the American Intelligence about location and returning of Fethullah Gullen in Turkey as predicted by Clairvoyant Dimitrinka Staikova in her Ebook :
Elections – USA, Turkey, Austria….Clairvoyant/Psychic predictions : #BlackLivesMatter, The Coup in Turkey ?, Devlet Bahçeli, CIA, FBI, Ku Klux Klan, White Supremacy…
On the top of the needle
By Clairvoyant : Dimitrinka Staikova, Ivelina Staikova and Stoyanka Staikova

Buy the Ebook from the Authors : https://sites.google.com/site/dimitrinkastaikova/
Buy the Ebook from Amazon :
https://www.amazon.com/Elections-Clairvoyant-predictions-BlackLivesMatter-Supremacy-ebook/dp/B01IRH0SJ0/
Buy the Paperback book from Amazon : https://www.amazon.com/Elections-Austria-Clairvoyant-Psychic-predictions/dp/1535398116/

This is a little part of Clairvoyant/Psychic predictions about :
John Brennan (Director Central Intelligence Agency) – Coups, World Conspiracies – Clairvoyant reading/Psychic predictions by Clairvoyant House “Dimitrinka Staikova and daughters Stoyanka and Ivelina Staikova” – from Europe, Bulgaria, Varna – July 17, 2016, 9 am.
http://sites.google.com/site/dimitrinkastaikova
Photo – July 13, 2016. Time – after the photo.
……..On July 13, 2016 – I see a lot of nerves. John Brennan – financial resources were needed of the releasing of goods – big and flat packages from a sea and railway transport. I see temporary problems with technologies and communications between their selves, disorders in documents and because of them problems with investigations. Two day earlier they were expecting the coup in Turkey. Tacitly ,there were consultations and advices what should be done in such moment. There were a special group, that was engaged with monitoring of the events and connection with Turkey. There were an aircraft of USA that flew from the american military base in Turkey and was touring- as a patrol, to prevent the external intervention during the events.
Through CIA and John Brennan, there is a sending (shipment) of gold in USA as a bargaining chip against Fethullah Gullen or his location.

John Brennan expects more serious problems in September 2016, that will threaten his staying in CIA as director. Now, after a few days- July 15-16, 2016 – are increasing the attacks from Turkey to Iraq and part of Syria. On a syrian territory there are made installations – I see pipes, that are connected and buried in the ground – direction Turkey. I see also small squads of people to move toward the capital of Syria – they bring mainly money in cash and test tubes with yellow liquid.
Around July 20, 2016 is expected a fight on the turkish – syrian border, which I see that it is well directed by CIA – the goal is killed people and collapse of earth layers – that in the future will be presented as an offer about new turkish – syrian border.
Around July 20, 2016 and a little after that – I see problems with russians – literally to all fronts, including in USA. In USA, the russians ………

“…The Alliance for Shared Values, a nonprofit affiliated with the Gulenist movement in the U.S., said hiring Flynn’s firm appeared to be part of a Turkish government smear campaign against the cleric….”.
“…Flynn, a former director of the Defense Intelligence Agency, is widely considered a contender for defense secretary or national security adviser. The former role would require a congressional waiver because he has not yet been a civilian for seven years….”.

Order your Ebook today, pay with PayPal and You will receive the PDF file with email delivery in the next 24 hours –http://sites.google.com/site/dimitrinkastaikova

………How Governor Peter Shumlin is seeing the US Election 2016 ? – As a first candidate president – he sees Hillary Clinton – there is an overlay of energy above her choice. The second candidate president – Donald Trump – he sees there are chances for success, but they are holding on the base of war – he is seeing the ship of Donald Trump turning down, the merit for that will have judicial and prison authorities. That opens the way up for Hillary Clinton.
Energy Companies of gas, oil, electricity and transportation of energy and energy corridors – total three companies are prepared for new business as an invasion on new place – at North. The entering on that place is through a closed zone – there is a russian object near (West). From the closed northern side, down to South. Where is the problem ? – Also the russians have found and liked the same place. The conflict zone is passing through the site of the americans – that looks like a road or highway. That separates the new object on two parts – northern, more appetizing and developed and northwestern – which become a closed zone too.
In the northwestern part – there is a working in depth – big depth, I hear sound waves on three levels on construction… As whole – the construction sideways has a form of jug (vessel), it begins with rectangle on the top, then lightly and oval narrows and here the object has height (altitude) – it ends oval with a bottom. From West to East, I see black liquid that flows. Outwardly, that looks like oil reservoir, it is like a river. Follows an opening from the reservoir and buildings as cisterns – connected each other. The road from the low to a light height from West to Northeast. The three energy companies are united in one, with one bank.
The weak spots of Donald Trump –
• A head influences on him with sounds ;
• A russian intervention in his business ;
• Blocking of his money ;
Strong spots – the people and increasing of their amount. Results – the russian business and collapse of the profits in USA.
• The first one is the money in the banks ;
• The second one is closed money and business;
The russian business in USA is like empty business – a chair on which are trying to sit american businessmen. Trump is the one who protects the russian business interests. In the future, Peter Shumlin sees Russia as leading and the union of russian company already with two energy companies. Which of the partners is leaving the game ? – an energy company for electricity.
• Until the end of September 2016 – cold, snow, expectation for partners and union.
• In the beginning of October 2016 – unrests, turmoils between the population of Vermont. Around October 10, 2016 – I see fires, shooting, attacks on a private business object – a big storage with cisterns and very big trucks. Problems with escape of criminals in Canada – transfered, stolen money, intervention of woman, released information. The people in front of them are speaking french and russian language. The end of October 2016 – increased security and police.
• In the beginning of November 2016 – there is a travel to Washington – signing of documents. Security guards, helping for the Elections.
The Weak spot of Hillary Clinton is her health. But also Peter Shumlin is seeing the victory of Donald Trump – despite everything they do for the victory of Hillary Clinton………………

Part of Clairvoyant/Psychic Predictions about :
Kellyanne Conway (Republican campaign manager of Donald Trump, Stategist and pollster) – A strategy, new outcome a second before the Election – Clairvoyant/Psychic predictions by Clairvoyant House “Dimitrinka Staikova and daughters Stoyanka and Ivelina Staikova” – from Europe, Bulgaria, Varna – September 19, 2016, 10 am.
http://sites.google.com/site/dimitrinkastaikova
….There was a standstill in the presidential campaign of Donald Trump because of disease. Now, Kellyanne Conway leads the campaign with the clear feeling that everything is sinking. The problems are coming because of the lack of money in the campaign. The activities are closed about financing. I see a few aspects :
• The lack of money.
• Each activity is accompanied with a lot of nerves.
• A lot of overlay of tension.
The presidential campaign is separated on two stages. The good news is that in the last moment appears a few times until it is established also a new energy company that is finacing one of the leaders. Then begins the slow pushing upwards of Donald Trump. That happens a second before the Election…..
……………………………….
…. Near him – near Donald Trump will stay a higher intelligence……

Media Confirmation :
Comey’s decision to notify Congress elicited critiques by those who said he had sidestepped Department of Justice policies, but it also inspired accusations that the director was withholding information about Trump—and some leaks from the FBI.
https://www.yahoo.com/news/donald-trump-faces-barrage-allegations-015734267.html

Media Confirmation about James Comey – reopening the investigation into Hillary’s emails and problems with the health of Hillary Clinton September 2016 as predicted by Clairvoyant Dimitrinka Staikova in her Ebook :
Elections – USA, Turkey, Austria….Clairvoyant/Psychic predictions : #BlackLivesMatter, The Coup in Turkey ?, Devlet Bahçeli, CIA, FBI, Ku Klux Klan, White Supremacy…
On the top of the needle

Buy the Ebook from the Authors :

James Comey (FBI Director) – Problems – When? with black movements, protests…When is the bad period for James Comey, Meeting with the business. When will be the lawsuit against Hillary Clinton? – Clairvoyant reading/Psychic predictions by Clairvoyant House “Dimitrinka Staikova and daughters Stoyanka and Ivelina Staikova” – from Europe, Bulgaria, Varna – July 17, 2016, 2pm.
http://sites.google.com/site/dimitrinkastaikova
Photo – July 7, 2016. Time – after the photo.
…..In the eyes of James Comey I see a lot of nerves, because of the case with the emails of Hillary Clinton. So structured, the accusation doesn’t reach to successful end. In the future, the accusations about the emails and their connection with Libya are separated. After the elections, the accusations connected with Libya are going in the court.
• James Comey, July 2016, has a problem with the controlling of the nerves and control of the degree of sound of its speech. After July 7,2016 – problems with the sinus drainage ducts – problems with nerves and wife. Before July 10, 2016 – a conversation with a leader of black movements. – Stress in a car – (but is is from civil servants). After July 10, 2016 – strong pains in the spine – taking of medicines, problems with kidneys. Before July 15, 2016 – there are disorders, injured – Electoral rallies.
Around July 20, 2016 – there is gathering (meeting) of energy bosses and big energy companies. James Comey changes its beliefs – he remains on its official duties and he observes them strictly, but he participates in a forum (business) connected with future business and new fields, and gold mining and …..- the business is connected with a space technology and creation of a new company, as a branch of the existing one. The business is starting on a land in Libya – Africa. It is related also with a fields and lands near Libya. The man who locally – from Africa will arrange the deal, leaving the country will be killed (in the future). Before the end of July 2016 are expected clashes with black movements – more than 70 people will be injured against a few injured policemen. I see a big mass of people gathered – I see their separation on two groups by the police and they will be beaten.
• August 2016 – after the first days – operation which FBI prevents – a deal with gold. Until August 10,2016 – I see an underground technique about withdrawal of liquid – a pollution and searching of the source of water pollution with energy products. Around the middle of August 2016 – a holiday and after August 16-17 – again unrests of African-americans.
• The end of August and the beginning of September 2016 – problems with Obama. August and September 2016 – problems with Hillary Clinton – I see problems with a car and a strong fright.September 2016 is a bad month for James Comey – full with nervous tension without personal time, with a loss of money, confidence, loss of everything he has built.
I see successful orientation in the future to the private business….After that, a political career is waiting for him……….
Media Confirmation :
• Attorney General told FBI director James Comey NOT to send letter to Congress about bureau reopening the investigation into Hillary’s emails because it could influence the election outcome
http://www.dailymail.co.uk/news/article-3884528/James-Comey-felt-obligation-inform-Congress-Clinton-email-investigation.html#ixzz4OUnZoRka

Media Confirmation about shootings and murders in North Carolina (Charlotte protests) as predicted by Clairvoyant Dimitrinka Staikova in her Ebook :

2016 World Predictions for USA –
About Each State – Republicans or Democrats on US Election 2016 ?
+ Hottest News Predictions – Psychic News
Part 2

Buy the Ebook from Amazon : https://www.amazon.com/2016-World-Predictions-USA-Republicans-ebook/dp/B019Z4FA3S

Buy the Ebook from the authors :http://sites.google.com/site/dimitrinkastaikova

North Carolina and State Governor Pat McCrory Clairvoyant/Psychic Predictions for USA 2016 – About Each State Of America – Who will win on US Election 2016 – Democrats or Republicans ? – By Clairvoyant House “Dimitrinka Staikova and Daughters Stoyanka and Ivelina Staikova ” – from Europe, Bulgaria, Varna – 17.12.2015, 3pm.
http://sites.google.com/site/dimitrinkastaikova
…………With the ordinary people the life will run with more cruelty among the people and as usually. The Criminality, shootings and murders are increased…….. 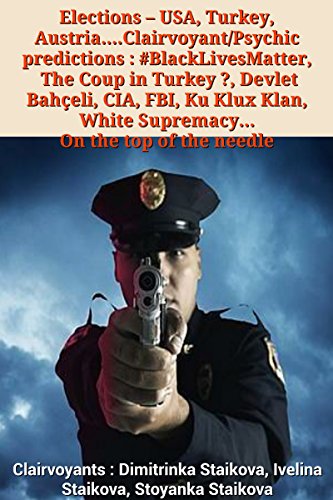 Buy the Ebook from the Authors : http://sites.google.com/site/dimitrinkastaikova

Buy the Ebook from Amazon – https://www.amazon.com/Elections-Clairvoyant-predictions-BlackLivesMatter-Supremacy-ebook/dp/B01IRGBI4K/