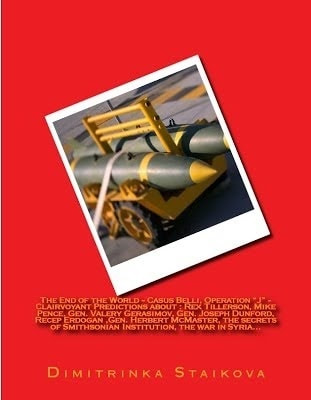 Table of Contents : https://clairvoyantdimitrinkastaikova.weebly.com/hottestnewspredictions/ebook-the-end-of-the-world-casus-belli-operation-j-clairvoyant-predictions-about-rex-tillerson-mike-pence-general-valery-gerasimov-general-joseph-dunford-recep-erdogan-gen-herbert-mcmaster-the-secrets-of-smithsonian-institution
​Buy the Paperback book from Amazon  –
https://www.amazon.com/dp/1544050038
​Price – 35 $
​Order your Ebook today, Pay with Western Union Online  – 35 $ and You will receive the PDF file in the next 24 hours with Email delivery :

To Order Your Ebook with Western Union Online  –
1. Login in https://www.westernunion.com/
2. Select  “Cash at Agent Location ”
3. Send the exact price of the Ebook – 35 $ to :
● Receiver Name : First Name – Stoyanka , Second Name – Staikova
●Country  – Bulgaria ●City – Varna
4. You will receive by Western Union  a confirmation email with the Tracking Number  (MTCN);
After You make the payment via Western Union, send us an email to  dimitrinka.staikova@hotmail.com  with the information  :
​1. The Name of the Ebook You have  ordered
SENDER NAME (First and Last name) and MTCN (Money Transfer Control Number  – WESTERN Union’s payment tracking system).
After We receive Your payment details  (SENDER NAME and MTCN) and the name of the Ordered Ebook – We will send You an email with the PDF file of the Ebook. ​​

World Predictions 2017 – The magnetic pole of the Earth – where it will stop ? Murders of russians…., Casus Belli on Northeast (date, month), Protests in USA…, Explosions of Nuclear plants….and volcanic eruptions. Energy corridors and problems. Wars and refugees… Operation “J”. Clairvoyant predictions (February 28, 2017, 4pm.) about March, April and May 2017 – by Clairvoyant House “Dimitrinka Staikova and daughters Stoyanka and Ivelina Staikova” – from Europe, Bulgaria, Varna.

The magnetic pole of the Earth is still changing. In the moment it is on second step – I see year 2017 another one displacement on East. Then is forthcoming another one last displacement of the final point – East, 4pm. clockwise. (MEDIA CONFIRMATION)

The place will be explosive, a place of war where a few nations will gather and fight. Until two months is the time of the first step, but as final rearrangement of the Earth are total four months. The war begins now from Northeast in a former Soviet Republic and a northern country (scandinavian) – two intelligence agencies : eastern and western and Nato armies. These are – part of February 2017, March, April 2017 – Times of Changes on the Earth and Casus Belli – the date is around 20. Then follows 2 months…..

The Planet Earth and the Climate Change – Cataclysms. The beginning – the end of the World and again the beginning. The new history – after the natural cataclysms – Clairvoyant reading/Psychic predictions (December 24, 2016) – By Clairvoyant House “Dimitrinka Staikova and daughters Stoyanka and Ivelina Staikova” – from Europe, Bulgaria, Varna

I see that the air currents are North – South.

The Northern hemisphere – The Arctic remains closed for now – I hear a sound inside. The wind is spreading the sound at East.(MEDIA CONFIRMATION 2)

I see a person with hands like fins (wings), his head is turned to West, but the sound is going to East. I see a tail. There is an object, which is round and makes these strong sounds to East. The object has a military application. I see a man, if I can call it man, he has very interesting spine – he is humped and very nervous – what should be hands is very short, there is inflated protrusion for a belly. His movements are like a snake and he thinks only for a big profit. On this stage, I see a lot of nerves and failed plans in this creature. How to recognize this creature – he has extremely big nose. There is something on the back of his head – like an addition, and it is full with electricity – a lot of electricity (energy). His home is inside the Earth – the opening is lightly in the eastern side, but almost in the middle. The way for his home starts vertically down, but then turns to West. The entrance is from a water hole and it goes to a cavity (hollow). I see two species, which are connected with water, separated in the moment – they are the one against the other. I see an alien space ship with sounds to the Space. And… death to these ones from the Eastern side. The problem between them comes beneath the Earth – injection, increasing of energy. I see a connection between the Moon and a closed area on the North Pole. The closed area begins to move at East – a snow hat.

The month of December begins a change connected with the Magnetic poles. The areas are moving at East and change three times the territory they close with snow – after that they stop.(MEDIA CONFIRMATION)

Natural Cataclysms are beginning and the big snow areas (sections) are increasing – to the half globe. The core of the Earth is increasing and injecting (magnetising). The Earth begins to vibrates while moving (makes a certain sound). There will be a perturbations on the sattelites. Again the sound willgo out on the Eastern side of the planet. There will be a sequel of icy lands to the Southeastern part of the Earth. It will remain only the Southwestern part of the Earth. It will be under the control of german money. The soothing (relief) of the oscillations (vibrations) of the Earth will come from the Southwestern parts of the Earth. There, I see the point of survival. The North – Eastern part of the planet Earth will survive its most difficult year until now – this is year 2017. The sounds will be fatal (ruinous, baneful) for sattelites, electricity, airplanes – the modern way of life.

Earth’s magnetic north pole has been moving East at an unusually fast pace, heading from the Canadian Arctic toward Russia.

Barack Obama G20 Summit (President of USA) -Heavy days – Sept.2016, Meeting in China G20 Summit – Conversations…,Alien Spaceship – People with Nazi’s cross, ISS, a storm by sound waves ; Foreign policy : Who has the money – he is the boss… – Clairvoyant/Psychic predictions by Clairvoyant House “Dimitrinka Staikova and daughters Stoyanka and Ivelina Staikova” – from Europe, Bulgaria, Varna – September 3, 2016, 4 pm.
http://sites.google.com/site/dimitrinkastaikova
……..Barack Obama G20 summit – too much conversations and nerves…There is a gathering of two opposing (rivals) camps in the background of negation – unwillingness for that meeting. The conversations will be about energy: nuclear energy, oil ,gas. About the meeting, I feel that Barack Obama is thinking like a meeting of dying or not alive people. This meeting is organized also by one powerful bank, that leads the union and it is against USA.
What I see is conversations about :
• The Space and the shooting of Space rockets, about a double big explosion on a launch site in USA (SpaceX).
• I see also conversations about artificial island in South China Sea. And the creation of two more artificial islands plus a third one, which has an energy field. The third island is located against the first one, deeper into the sea. There is superimposed soil, to be made possible the working there under cover. The other two islands will be at South and North. The south one also will be for deception of the enemy.
• I see problems in USA with an occupied (givven) land – a business project that is successful for now.
• I see problems in the International Space Station (ISS) – Separation and contradictions.
• I see gravitational waves and alien spaceship, that comes from Northwest directed to ISS.
• I see the figure of a nazi’s cross (swastika) in a person who brings good, luck and wears a spacesuit, and he has a ball (energy ball) in front of his chest. He is far away from the thoughts for war. I see people – telepaths. I see : from outside – looks like a human, but inside in the head – a skeleton like pyramid, emmiting a huge energy. This is a spaceship for intelligence.
• Conversations about the war on the Turkish – Syrian border and the forthcoming closed zone and the construction there.
• Conversations about electricity and power plants.
• Conversations about refugees and emigrants.
• Talks about imperial interests and questions : “Who is the Boss?” – starting of negotiations and the imposition of the chinese race.

A storm is coming by a sound waves. A big spaceship comes – a huge energy center from Northwest to Southeast. It has a round shape – as the Moon. It is artificial and very big.