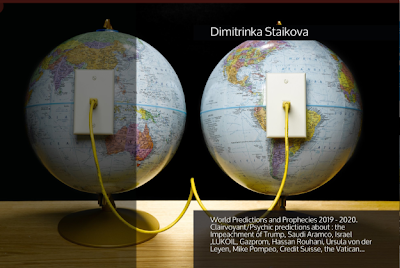 ​Order your Ebook today, Pay with Western Union Online  – 50 GBP and You will receive the PDF file in the next 24 hours with Email delivery :

​​To Order Your Ebook with Western Union Online  –
1. Login in https://www.westernunion.com/
2. Select  “Cash at Agent Location ”
3. Send the exact price of the Ebook – 50 GBP to :
● Receiver Name : First Name – Stoyanka , Second Name – Staykova
●Country  – Bulgaria ●City – Varna
4. You will receive by Western Union  a confirmation email with the Tracking Number  (MTCN);
After You make the payment via Western Union, send us an email to  dimitrinka.staikova@hotmail.com  with the information  :
​1. The Name of the Ebook You have  ordered
SENDER NAME (First and Last name) and MTCN (Money Transfer Control Number  – WESTERN Union’s payment tracking system).
After We receive Your payment details  (SENDER NAME and MTCN) and the name of the Ordered Ebook – We will send You an email with the PDF file of the Ebook. ​
☆☆☆☆☆☆☆☆☆☆☆☆☆☆☆☆☆☆☆☆☆☆☆☆☆☆☆☆☆☆

April 2020 is a bad month for the US officials – the population in the most of US States is before a riot….(MEDIA CONFIRMATION)

LIVE UPDATES: Riots break out across America after George Floyd death – May 30, 2020

​MEDIA CONFIRMATION of : “Year 2020 – USA enters into an election year, begins a stronger dictatorship” and “…About USA will remain the Arctic as a new distribution of territories” April 2020 – seen through the eyes of Mike Pompeo and predicted by Clairvoyant Dimitrinka Staikova in her book published October 5, 2019 : World Predictions and Prophecies 2019 – 2020

​Media Confirmation of : ” European states go on war footing”  – seen through the eyes of  Ursula  Von Ser Leyen  – as predicted by Clairvoyant Dimitrinka Staikova  in her book published October 5 , 2019 : World Predictions and Prophecies 2019

Media Confirmations : “#Israel’s War Footing Against the #Coronavirus” and “…#BennyGantz will unite with #BenjaminNetanyahu because of war and military actions” April 2020 – as predicted by Clairvoyant Dimitrinka Staikova September 2019

MEDIA CONFIRMATION of “ Trump is sending ships with fuel to Australia  – December 2019  – as predicted by Clairvoyant Stoyanka Staikova in her New  book published October 5, 2019  : World Predictions and Prophecies 2019 – 2020.

Only a small part of Clairvoyant/Psychic predictions about :

……….At the end of year 2019 there will be problems with Ukraine – they will give up from a prepared infrastructure and there will be a talking about new pipes and technologies at a new contract.(MEDIA CONFIRMATION)

There is a beginning of……

Donald Trump ( President of USA ) – Yes , this is Trump – the same health diagnosis as Hillary Clinton before a seizure , His health , Business , Lawsuit , Impeachment , 2020 Election – Clairvoyant reading / Psychic predictions September 29 , 2019 – by Clairvoyant House “Dimitrinka Staikova and daughters Stoyanka and Ivelina Staikova” – from Europe, Bulgaria, Varna
http://clairvoyant-dimitrinka-staikova.mystrikingly.com
http://clairvoyantdimitrinkastaikova.weebly.com
Photo: September 24 , 2019
Time of the clairvoyant reading – after the photo
Donald Trump’s health:
At September 24 , 2019 I see an inflamed cold at the nose , disease problems in the both eyes. Except reduction of the vision , I see formations in the tear duct of the right eye filled with blood and a formation ( as cysts ) above the left eye – he will feel them as swelling. The throat at right is slightly inflamed. There is a swollen thyroid gland and well shaped cysts at left. The heart is ill , it will suffer in its lower part because of gases in the stomach. I see an inflammation of the bones – now – the bones of : the both arms , the pelvic area ( bilateral ) , his spine is bold in the beginning and in the end – it is very inflamed. From the inflammation the pain is going at the back of the head at left and the back of the muscles – at left. His right arm has tightened blood vessels – non treated by a passed stroke. The function of balance is very impaired – I see a strong inflammation of the tailbone – his health diagnosis is repeating the health diagnosis of Hillary Clinton before a seizure , but it is even worse. Except the playing of the blood pressure , because of the heart and pancreas the blood pressure is falling very low. Aside of his body under his clothes, I see a device which is giving him energy ( double ) , as two circles aside of the belly button. They are giving him a strong energy. I see inflamed urinary tract , left kidney , and problems in the blood and liver. He is feeling more pain at the right shoulder and the bone of the right arm. The reduction of his vision and the way he walks will show his physical condition. He often sighs when sitting. He is recovering. Donald Trump has power for governance. He is breathing difficult because of the sinus channels….
He doesn’t like when someone wants money from him. I see a strong wish for travel to Florida and a rest.
Now – October 2019 – he is worried by Canada, the centers for research there -medicines , Space projects. I see documents for business and the business participation of Trump – the documents are signed in Canada – International consortium with the participation of Jews. There is a forthcoming business war in Canada and a shift ( displacement ) of ( business ) layers that will be until the New year 2020 and it will burn more intense March 2020.
October 2019 – I see problems of Trump with the Federal reserve , Budget , Markets – shares. After the middle of the month is starting an energy war between ships of USA. October is the month of the fish and the problems with the fish ( vital ). It will be found a hole in an underwater cave and the first from that hole is leaving dead fish and hot water, and then the lava of an underwater volcano. There is a warning since September 2019 . At the end of October 2019 I see a theft – money that will be missing on paper ( in documents ). The Federal reserve and the Budget will be affected , they will search for a possibility about investments from rich people. A chasing ( persecution ) of the foreign business has begun – with legal actions and a demand for money. I see the searching of the way to Trump from the German business in USA.

Read the rest only in our Ebook and Paperback book :

Saturday’s test came as House investigators on Capitol Hill were interviewing a White House budget official as part of the impeachment inquiry. Trump has insisted he did nothing wrong.

Order your Ebook today, Pay with PayPal – 50 GBP and You will receive the PDF file in the next 24 hours with Email delivery :